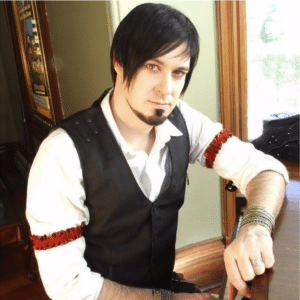 As a musician, Draven has performed in front of crowds in the tens of thousands, composed music for television and film, and been a guest on multiple projects – some selling upwards of one million copies. He has also published articles, books, and courses on the many facets of the music business, and coached bands all over the world in their careers. He currently coaches singers and voice teachers through his business, Rock Singing Lessons, and is a Master Certified Instructor with The Vocalist Studio.

As an author, Draven spent decades intensely engaged in the academic study of ancient cultures and religions. Turning his focus away from academic expertise and into the powerful world of fiction storytelling, his stories draw from a rich history of parable, myth, and supernatural allegory now buried deep within our modern culture.

In life, he is the husband of the incredible Nadine Friday, and father to two amazing sons – one of which has Autism, whom Draven and Nadine raised to be independent.

Draven’s current personal passion is  The Silent Still, producing music, stories, art, film, events, to entertain and inspire those who love an epic and magical story of a darker aesthetic. If you enjoy the likes of Gaiman, Del Toro, Lovecraft, Preacher, Constantine, Dresden, and Penny Dreadful, then you will feel at home there.